Australian and Spanish coaches to host player workshops in September

Western Province Schools’ Water Polo will be hosting a series of hi-performance player workshops under the tutelage of Australian and Spanish internationals over the first two weekends of September.

The workshops will be age and gender based and limited in numbers to ensure personal attention.

These four individuals are among some of the best actively involved in coaching school-age players and bring massive experience as players and coaches. This is a unique opportunity for local players to be exposed to the latest techniques. WP-based coaches will also be attending sessions hosted by the four international coaches to ensure that they too are exposed to the latest techniques in player development.

Each group will have two x two-hour sessions and the cost is R750 per player. Space is limited for each age and gender group, book and pay early to secure your position. This is a one-off opportunity to be exposed to some of the best water polo coaches to have visited SA shores in recent years.

For more information or to book email manager@wpschoolswaterpolo.co.za or phone Logan Mackie on 083 298 3714. 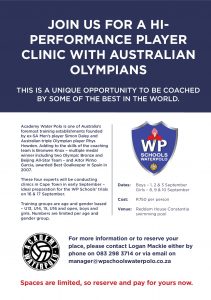