With the term now in full swing, we can already see the teams who will be standing out this season, and those who may just surprise everyone in the coming weeks. Only time will tell!

The past weekend’s results

In the boys section only two sets of games were played:

With a very close weekend between SACS and Rondebosch, Bosch has pulled off with the overall points, winning the U19A game 10-8, the U15A 4-3, it was only the U14 game which SACS walked away on top, winning 5-3.

The one to watch in the future though has to be the U13A’s, which ended 1-1. Bishops took on Wynberg, and walked off with all the points, winning all of their A side games, with relative ease. The must-see game in the boys section is still tough to call, but it looks like the rivalry between Bishops and Rondebosch may turn into a herculean battle, and that takes place on the 18th of February, at Bishops. 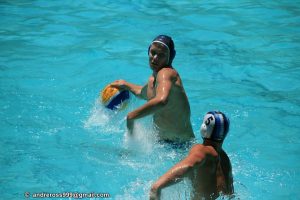 The girls were a lot busier, playing five sets of games over the first week:

Westerford is sitting on the top of the table after two rounds, winning both comfortably; 13-1 against Wynberg Girls, and 19-3 against Bloemhof. However, close on their heels with a game in hand sits Herschel who easily walked away with a 17-0 win over Rustenburg. Overall, it looks like the must-see game in the U19A section will now be between Reddam and Herschel; after the Herschel versus Westerford game, which took place on the 23rd of January, ended 9-9. 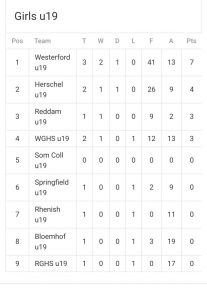 Don’t forget to keep up to date with all results by following the app!

Matches for the coming week

Weekends are always a busy, but why not catch some of the action as we build towards the knock-out cups? While many of the boys U19A sides are away, we still have some big clashes between the younger age groups, and the girls will be in full swing.

The boys see Wynberg take on Rondebosch at Wynberg; SACS are on the look-out for the narrowly missed points against Reddam at Reddam and Paul Roos battles Bishops at Paul Roos. These games all take place on Saturday, so why not head through and give the boys some support?

The girls have a very busy Friday, with Rustenburg heading through to Reddam for what should be a great game; Bloemhof makes the journey to Herschel; Westerford takes on Springfield at Westerford and Wynberg Girls battles Somerset College at Wynberg.

Up your skills in the weeks ahead

In the next few weeks we’ll see table officials’ courses, referees’ courses and we still plan to stage a coaches course. So keep your eyes open for when the posters are released.

If you require any further information on anything course related, contact Logan Mackie at manager@wpschoolswatrpolo.co.za.